When I went to art school (Otis in Los Angeles) many moons ago, I knew I needed to get better at figure drawing. I had already taken several semesters at the local Community College (Glendale College, aka GCC) and had a wonderful teacher there. But after a while, I’d exhausted all my possible semesters of life drawing and it was time to move on.

I happened to see an ad in the L.A. Times for this art school, called Otis. I had never heard of it before, but I sent away for a catalog. And when I got the catalog, I knew that it was where I wanted to go. (I also considered Art Center in Pasadena, but it was a no-go, because it would have been too difficult to get there by bus. So, that’s how I made my decision for Otis. Bus routes.)

Anyway, I had some semesters of wonderful classes there, which showed me more about anatomy and figure drawing and I was doing okay, and improving. Then one semester, the new schedule came out and among the figure drawing classes listed, was one taught by  . . . Burne Hogarth.

No, that’s not good enough—just typing it out like that—that doesn’t have enough gravity. BURNE FRIGGING HOGARTH. 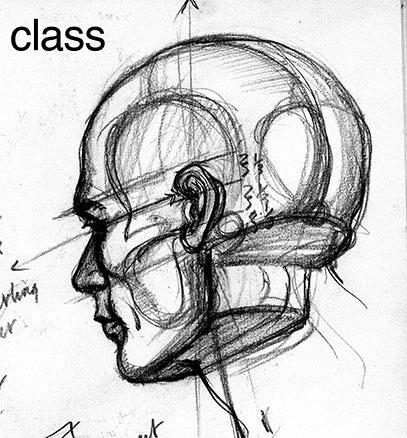 Oh my goodness. I think I shrieked right there in class (wherever I was) and made a complete scene in front of everyone, pretty much babbling, “BURNE HOGARTH! BURNE HOGARTH!!!” over and over again. Several other students wondered what my problem was, and then I explained, between excited shrieks, that this guy has written one of the best instructional books on figure drawing and anatomy and I had studied his books from cover to cover and they rocked my world. And now he was going to teach there. At Otis! Sign me up!

Several of the other students who heard me shriek about Hogarth signed up for his class too, just based on my reaction. They later told me that they were soooo glad that they did. 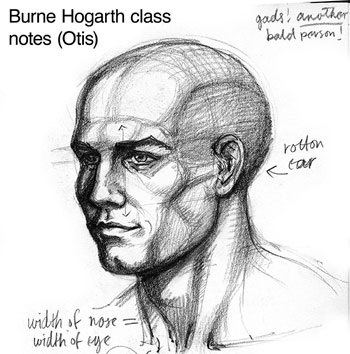 Mr. Hogarth (as we all called him) was a wonderful teacher, very old school. Always full of information and ideas. He’d draw these biiig drawings on an easel at the front of the class and lecture on whatever part of the anatomy he was covering that week. It was amazing to watch him work.

He attracted some very advanced students. There was an art teacher from one of the Cal States (who was already a fantastic artist) who asked everyone to not mention to Mr. Hogarth that he was a teacher too; he was just there to learn from the Great Hogarth. There were some illustrators, comic book artists, and a guy from Disney as well. Some really amazing people. And some “regular” students, like me! It was such a fun class and I know it helped me improve my skills a lot. I was lucky to have a couple of semesters with him. I’ll never forget.