I have been entering the online Art Store Jerry’s Artarama’s contests recently. The prizes are just up my alley—gift certificates! I am an art materials junky, so this just feeds the addiction.

In June they had their annual Charvin Oil paint contest, and my two entries got Runner Up awards, which meant a nice little gift certificate (which I promptly spent, of course!). 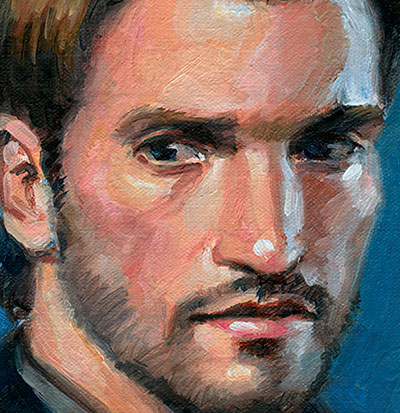 “Sideway Glance,” 5×7″ oil on canvas panel. I used mostly Charvin Oil paints, which I enjoyed. More on the paints below. Click on thumbnail to see uncropped image. 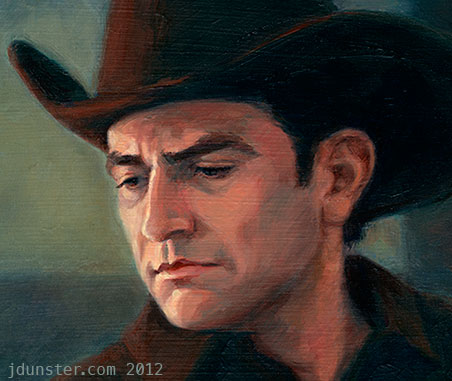 A few bits of info: First, while I already had some Charvin paints in my paintbox, I bought some more tubes to make it easier to qualify for the contest. (Jerry’s knows what they’re doing, since they know some artists like me will buy more supplies just so they can enter the contest! Well played Jerry’s, well played.) But as I was painting, I made a discovery—I really like the paints! They are nice quality, plus there are so many interesting colors. Now granted, some of them are “convenience mixes” (tubed mixtures that I could easy recreate myself) but some were using pigments, or variations on pigments, that I hadn’t really tried before and I haven’t seen elsewhere. Sure, I could have lived without some of the new colors I “discovered” from Charvin, but still, I found them interesting and I think they’ll serve me well in the future. A particular favorite is Sanguine Brown, which is more like a blood-red. Fantastic color and wonderful for portraits.

Also: These above two paintings are from what I call “The Novela Series.” They are inspired by scenes from my favorite telenovelas (Spanish-language soap operas). I’ve long admired these shows, starting when I watched L.A.’s local Spanish channel 34 (KMEX) many years ago. So you could say I kind of “grew up” with these shows. (Kind of.) Unfortunately, that doesn’t mean I speak Spanish that well—yet. (But my vocabulary is improving gradually!)

I decided to start a “Novela Series” for a lot of reasons. I was in need of a “theme” for some portrait sketches. Good practice, to do the sketches. And also, I love pop culture and have for a long time, starting with my art “career” painting movie start portraits for fans and aficionados back when I was in high school. Furthermore, I find the over-the-top melodrama and campiness of telenovelas to be simply delightful. Just my style. What’s not to love?

But if I were to put it in my artsy-fartsy terms (like, if I were to have to fill out an “artist’s statement” explanation) I’d say (truthfully) that telenovelas reflect a fascinating part of our American culture. Telenovelas are very popular in the USA (sometimes winning out the time slot over English-language network shows) but at the same time, if you don’t understand Spanish, you might never have heard of them, or are are barely aware that they exist! It’s like they “hide in plain sight”—part of our culture, yet invisible at the same time. So I just want to explore that a little bit with some paintings.

A FINAL NOTE: Besos, chicas! If you are visiting this page because you recognize either of these paintings as resembling a favorite telenovela character, welcome! Lo siento, my Spanish grammar is just too embarrassingly bad so I won’t attempt to write it here. But I am glad that you like the paintings. I didn’t attempt to make the portraits resemble the guys on TV, but I guess some of you can recognize them anyway! Je je je!