Posted by admin on December 6, 2012 in paintings, portraits | 0 comments

Another in my series of paintings exploring human expression and emotion, inspired by those melodramatic Spanish-language soap operas. (So much crying and angst! So over-the-top! So campy! I love this stuff!) Other paintings in this series are “Sad Tears,”  “Sideway Glance, and Roger.”

I started working on this series because I needed the practice (an interesting excuse to paint little portrait studies) and I thought the challenge of trying to capture the expressions was a needed exercise. Plus I love those Spanish soaps! I started watching them years ago (off and on) and they really have helped with my Spanish comprehension. 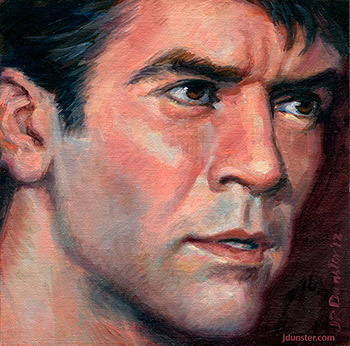 I used SourceTek‘s fantastic oil-primed linen. Oh my word, I can’t say enough about SourceTek. When I put the first brushstrokes down on an oil-primed SourceTek panel, I stopped and went, “Whoa!” Kind of like if I’d eaten an especially luscious piece of chocolate. It was that sublime. You just had to be there. The way it took the paint, the texture . . . *sigh* Seriously, I’m in love with these panels. I’ve also got a nice little order of oil-primed linen from RayMar, and I anticipate a similar reaction.

I use good quality paints of various brands. Some of them standard quality “artist grade” (like Winsor & Newton’s Artist Oils and Grumbacher’s Pre-Tested) but I also have some heady, high-end super-duper fancy oil paints. Like Vasari. Sigh and say it with me . . . Vasari.

Some day I’ll devote a whole blog post to some of my favorite paint brands, as well as more about the colors I like best. But not in this post.

This painting was started several months ago, was shelved as I got sidetracked with other things, and then I returned to it. There was some fussing and fiddling that went into it (getting the proportions of the head correct took a little longer than it should have) but finally I think it’s done. I feel like the painting style here harks back a little bit too much to my illustration roots (I studied illustration in art school) but that’s okay. I’m simply glad to have it done. Onto the next painting!