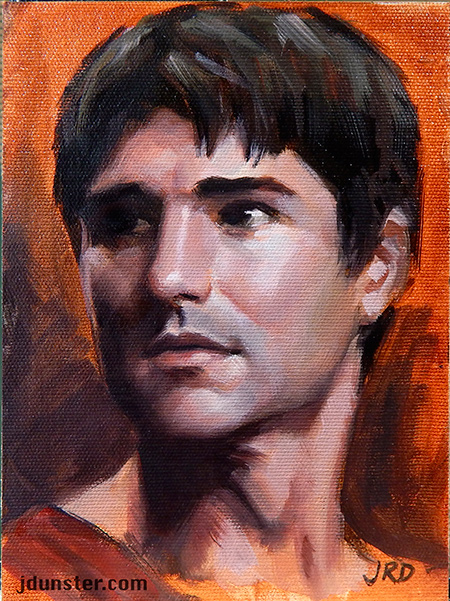 I did some final tweaking to this painting and I think it’s done!

For some reason I had trouble with this; perhaps it’s still “not right,” but I believe in letting go eventually and moving on to the NEXT! So that’s what I will do with this.

Again I used a reference photo from Jason Aaron Baca (model) with photographer Portia Shao. I love his photos because there’s so much drama there. I love the drama! He’s so generous to make his stock photos available to artists.

With this pose there was a slight “searching” or “beseeching” expression on his face, which I enhanced. I did a few slight adjustments to his features (just to mix it up a little). I hope this will make for a somewhat arresting portrait.

Painted with oils on another Sourcetek (I think—or was it Raymar? I think it was Sourcetek) panel. I love the texture of these panels. I covered the entire panel with a thinned-down layer of Transparent Oxide Red, which I wiped away in some spots (to paint in the face and flesh tones) but I left much of the Oxide Red still there. I think it worked as the background.