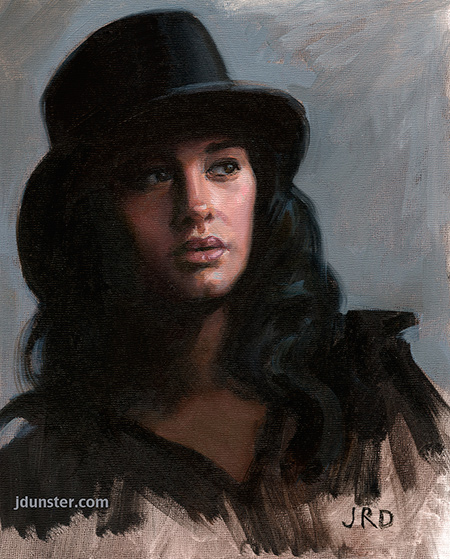 “Black Hat” 8×10″ oil on panel. Thanks to Cathleen Tarawhiti on dA for the beautiful photo I used as reference!

The latest effort, only I’ve been picking at it and picking at it for a while now . . . I don’t know why some paintings are like that. There are the paintings that come together in a few hours, and then others that I have to revisit and fix this and fix that. Why why why? 😉

I liked the simple color scheme in this one (lots of black and grey) and the drama of the pose.

A very limited palette was used on this one. I maybe used some magenta or perm. alizarin crimson somewhere, but for the most part I tried to limit it to Zorn: White, Black, Vermillion (Cadmium Red Light), and Yellow Ochre. There wasn’t much need for many more colors than that.

I used an 8×10″ acrylic-primed panel from Dick Blick, it’s got a canvas-like texture which I kind of like! 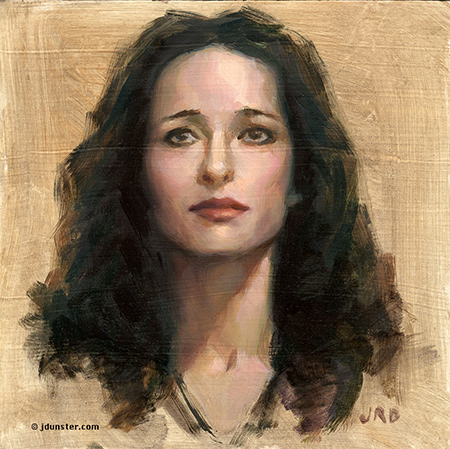 I’m not sure exactly what’s going on with this one. I loved the drama (drama, drama, drama! 😀 ) of the expression and the pose. I tried to keep the brushstrokes loose, but sometimes that doesn’t always work out.

The panel was primed with an oil-based primer, which makes it so nice for wipeaway and texture, like you see in the background. I first covered the whole panel with a thin wash of a brown, which I then wiped away, keeping some of the color to stain the background and also to show the texture of the priming brushstrokes.

The expression is a bit ambiguous. Is she afraid, scared? I think she is indecisive, ready to make a decision and not sure which way she’ll go. But interpreting her expression is up to the viewer to decide. 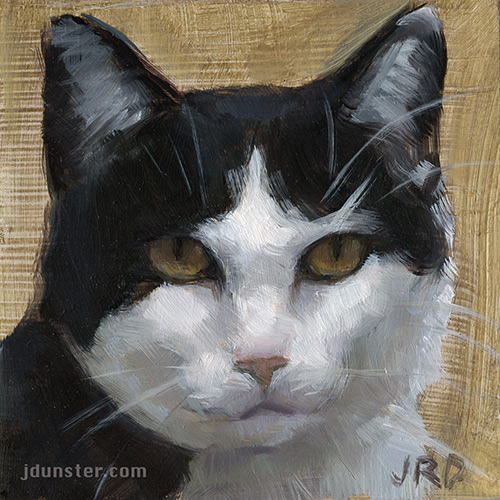 I’m a “cat person” and have been enjoying painting these series of cat heads. I had a lot of fun capturing the various whites and greys in this B&W kitty’s face. The subtle colors found in the white fur, the shadows of the fur, was a challenge that I enjoyed very much.

Thanks to azaleapoena on dA for the stock photo I used as reference! 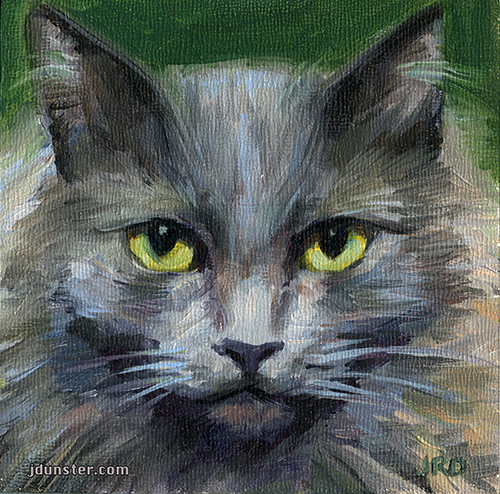 This one looks a bit grumpy or sour. An alternate title might be “Glowering Grey Cat Head.” I enjoyed finding the various greys (warm and cool greys, dark and light greys) in the cat’s coat. Thank you to nickistock of dA for the use of the photo for reference! 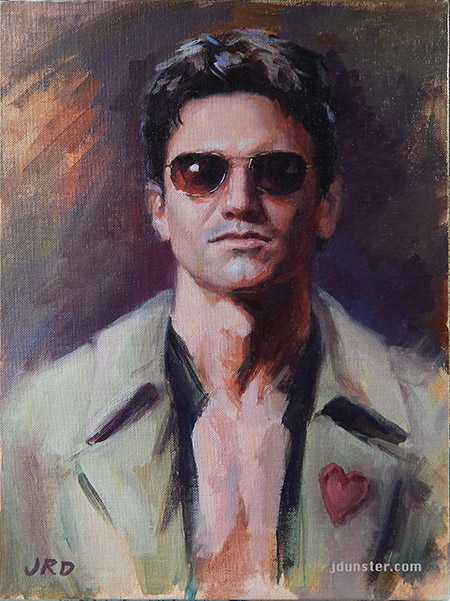 “Hidden Heart” 9×12″ oil on linen panel. Many thanks to Jason Aaron Baca (model) and Portia Shao (photographer) for the reference photo!

This is a “put a fork in it, it is done” painting. I do like it, but I also think there comes a point where if you pick at something too much, you ruin it. I think I’ve reached that point.

I actually started this painting a few months ago, for a Valentine’s Day painting challenge (we had to do a painting with a “hidden heart” in it somewhere). I returned to tweak a few more things on it just a few days ago. And now I think it’s time to call it done, even though, as always, I see things that I would like to tweak some more. But there’s a limit, right? And it’s time to move on. Right? 😉

It does seem like I do a lot of paintings of Jason Aaron Baca. And I do! He is awesome. He’s a highly popular figure on DeviantArt.com, where he has a plethora of reference (“stock”) photos available for artists to use. I have been collecting these photos for a long time now and am on a roll, doing a series of paintings from some of them. I love the drama of some of the shots!

The painting is on 9×12″ linen panel, by Fredrix. It’s classified as “archival” (meaning it is durable and won’t fall apart before its time). Fredrix has archival boards available in linen as well as cotton, and the linen ones have the option of being primed with either acrylic or oil-based primer. This painting was primed with acrylic, if memory serves.

There’s something quite sublime about the texture of linen, I can’t describe it exactly, but I like it very much. I’ve stockpiled quite a few of these boards for future use.