Home » paintings » An Apple, and Alkyds

An Apple, and Alkyds

My absence from this blog should not be interpreted to mean that I haven’t been painting! I’ve got several new works lined up, as well as other things, art-related, going on. 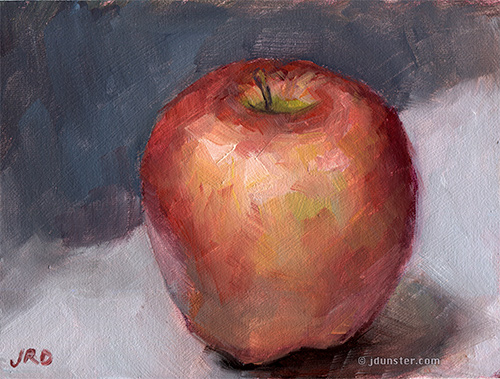 This was painted a few days ago, from a simple still life setup at my studio. I painted with fellow artist Diane, who has previously worked mostly from acrylics and wants to get into oils. We had a lot of fun doing our paintings. She provided the apple!

I wasn’t giving Diane painting lessons, not directly—we mostly just hung out and painted. It was a lot of fun and I enjoyed rambling on about oil painting, some of the technical aspects of it. But, since I’ve had some inquiries about giving lessons, I’m going to start doing that pretty soon.

Diane and I attended a Still Life workshop last weekend, again with the brilliant Adam Clague (whose previous instruction has helped me immensely). We both learned a lot from that workshop, and specifically to me, I really appreciated Adam’s instruction on composition! (Which I’m not claiming I utilized in this small apple study! LOL!)

A BIT MORE ABOUT ALKYDS

This apple was painted with alkyds—aka ‘fast drying oils.’ I’ve been painting in alkyds, off and on, since I was in art school many years ago. I remember when there was only one brand, from Winsor & Newton! Now we have about four different lines of alkyds, Winsor & Newton (“Griffin”), Da Vinci’s Alkyds, Gamblin’s “Fast Matte” alkyds, and C.A.S. alkyds. I have tubes from all these brands. They’re all good, though C.A.S. is considered by some to be the higher end and Winsor & Newton more “student” grade. (At least the prices seem to indicate this.)

Alkyds paint just like oils, they blend well, are buttery and are “forgiving” like oils. They are oils. But they have an “alkyd” smell (not a problem for me) and start to dry and tack up on your palette after a few hours. Since I’m all about fast, fast, FAST drying, this is my main reason for using alkyds! I don’t usually do day-long painting sessions on the same work, so after a few hours it’s probably time for a break (and that’s when the painting is starting to tack up a little anyway). If I use Liquin medium (or some other alkyd medium) the painting may be dry to the touch (and ready to be worked on again) in about 7-12 hours. Alkyds are advertised as drying within 1-2 days. I find that with the use of Liquin (which adds more fast-drying properties to the already fast-drying paints), they are always dry in less than a day. (Though I don’t paint super thick.)

I’m going to experiment with painting more thickly, which is why I pulled out the alkyds. I think that even without the use of Liquin (which makes the paint more fluid) and with the paint more thickly applied, it should be dry to the touch within a few days (as opposed to a week or more that it would take “regular” oils to dry). I love the look of more thicker, more impasto paintings. (Not super-thick, but just more liberally applied paint.) I’ll see how that works!

I have some more paintings to show, including some to put up for sale on DailyPaintworks, but first another trip! This time I’m going to Texas, and through Arkansas, in particular I want to see Crystal Bridges Museum, which has been touted to have some fabulous artworks that I am very much looking forward to seeing. I’ll be returning home in a week and can then resume painting and hopefully put up some new works for sale soon after.