Jason in Shadow, oil on Gessobord 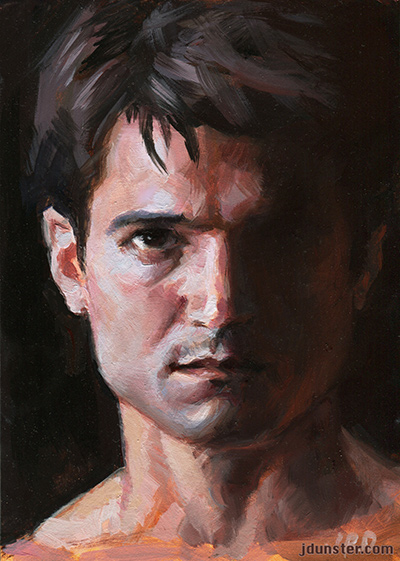 “Jason in Shadow” 5×7″ oil on Gessobord. Thanks to Jason Aaron Baca (model) and Portia Shao (photographer) for the stock photo I used as reference.

I classify this as oils, but to be more specific, I used fast-drying oils (alkyds) on this painting. They are one particular flavor of oils and have been around for a while. (Read more rambling from me about them on this post.)

I’m a big fan of Jason Aaron Baca’s stock photos on DeviantArt. So much drama! Dramatic poses, dramatic lighting, what’s not to love? So here’s another little oil sketch based on one of his photos.

With this painting I was working again with trying to capture the light and shadow, and of great interest to me, the warms and cools. He had a lot of cool tones in the highlighted parts of his face. I’m also working on making more pronounced brushstrokes, more strong and visible. I love bold brushwork and want to get more proficient with that!  So exciting!

So, another one done. Put a fork in it! Now onto the next oil sketch. I have several in the works!