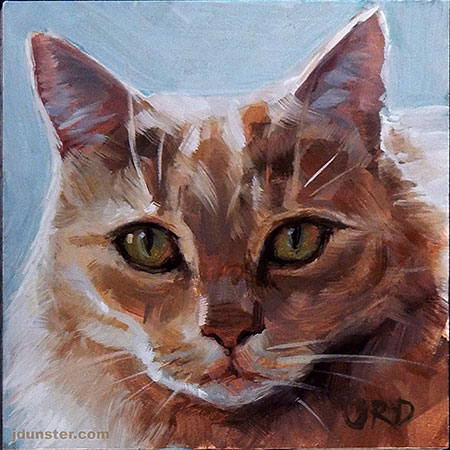 “Fluffy and Orange,” 4×4″ oil on Gessobord. Thanks to papatte of dA for the stock photo used as reference!

I wanted to do an itty-bitty painting, and finally got around to painting this orange, fluffy cat head. I tried to keep the brush strokes more spontaneous, but alas, I must fuss. For a little 4×4″ painting, there is a lot of detail, I suppose!

It was also a challenge to try to get the “orangeness” of the cat’s fur, when the cat’s face is mostly in shadow. I tried to keep the intensity of color under check, because otherwise the kitty would look like a Cheeto, glowing orange! I fear that this picture of the painting may be too bright and saturated (depending on the calibration of your computer monitor or mobile device). The actual painting doesn’t have a Cheeto-orange glow to it, at least that was my aim!

But I wanted to paint this kitty head, because it has such a sweet expression and is so FLUFFY! I love the fluffy kitties. 🙂