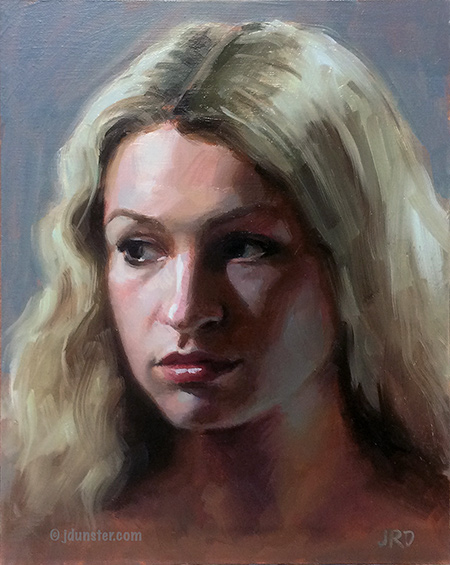 I started this painting several months ago. I kept on picking at it and picking at it, then put it away. Finally I decided to finish it, once and for all!

Rose is a model for one of the local drawing groups I attend. I did some sketches of her from life, and asked her if I could take a few photos to use as reference for paintings later on. She graciously accepted, and even instructed me on which poses and lighting would be best! But in fact, some of the poses she didn’t recommend turned out to be just what I wanted!

I liked the dramatic lighting on her face, and her sideways glance. She says she has this habit of raising one eyebrow quizzically, which I added (just a little) in this painting.

Rose is originally from Iceland, and during our drawing sessions, she’d tell us a little about her native land. So that’s where I got the idea for the title of this painting.

I could have picked at this painting a little more, but I decided that I’d tortured in enough, so put a fork in it! It is done!

I’ve taken a few other reference photos of Rose that I plan on working on soon, to make a larger, more ambitious painting.