An experiment in acrylics & limited palette

Posted by admin on May 2, 2015 in paintings, portraits, Tutorials | 2 comments 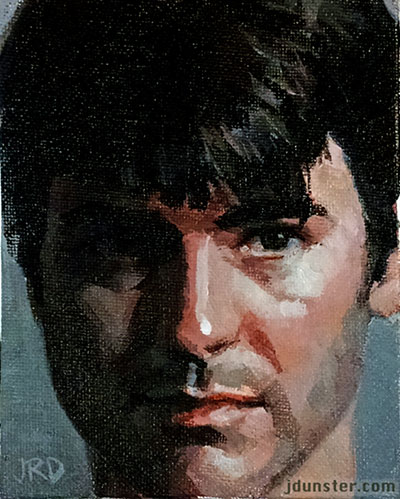 “Jason in Acrylics,” 4×5″ acrylic on canvas panel. Thanks to Jason Aaron Baca (model) and Portia Shao (photographer) for the stock photo used as reference!

Another experiment with student paint (sort of) as well as an attempt to get better at acrylics! I dabbled with some acrylics recently, and was so abysmal at it, that I have now decided to try to improve my skills. I don’t recall having such dire issues with acrylics when I was much younger, but I paint differently now, I guess.

This painting is far from being that great, but I found some promise when I was working on it, so it is posted here. I found that if I started with a good coverage of lighter, opaque colors, and built upon that, in layers (trying not to paint too thinly) that it wasn’t so bad. I didn’t aim for any detail until later in the painting—the beginning stages were all just blobs of colors. While I tend to add details later when painting in oils, in this acrylics experiment it seemed crucial to do so.

A mini review of some acrylic paints (in particular student paints).

Additionally, this is another experiment with the Zorn Palette (a limited palette consisting of White, Vermillion, Yellow Ochre, and Black—you can read a previous post about Zorn here). I found the acrylics paints to be different than my oils, and the pigmentation not as “rich.” My palette consisted of some student paints from the North American chain craft/art store, Hobby Lobby. Their store brand of “Master’s Choice” acrylics weren’t that bad! (I write about student paint—in particular “Master’s Choice”—in this post.)

My palette consisted of:

I had just bought some artist grade acrylics and wanted to test them out, so I alternated between the student paint (Master’s Choice) and the artist grade. I thought the Master’s Choice were okay, but the Vermillion was too “warm” (more leaning towards orange), so I ended up using the Lukas Pastos Vermillion, which was just a teensy bit more “cool” (more leaning towards magenta, though since it was Vermillion, it wasn’t that cool).

As I explained in the previous post about student paint, I use an artist grade white even when painting with student paints, because white is so often used, and so vital to the success of a painting, that using a weaker, cheaper student white is not advised.

The Master’s Choice black was surprisingly potent, had a good lightfastness rating, but I feared it might be a little too warm (leaning towards brownish undertones). The Sennelier Ivory Black leaned a little more towards cool (blueish undertones) so I used that as much as I could, even though I didn’t feel that the paint was as pigmented as the Master’s Choice.

My quest to learn about painting in acrylics:

I love my oil paints, but sometimes working in acrylics have its advantages—like when you want to get something done in a jiffy! Acrylics don’t have the longer waiting time of oils. (Of course I use a medium with my oils to speed drying, so they’ll often be dry to the touch within 24 hours or less, but sometimes that’s still not fast enough!) Acrylics thin with water, which can be preferable when working in environments where you don’t want the hassle of using oil mediums and solvents (though again there are workarounds for that). But even so, there are times when acrylics have their appeal. And I haven’t been as adept or as comfortable with acrylics as I’d like. So I’m going to be working on that.

I’m very excited about an upcoming online painting workshop I’ll be taking, with an artist who has shown great mastery with acrylics, Chantel Lynn Barber. The lessons start next month in June, and I can hardly wait! So I’m getting started early, dabbling in acrylics and seeing what I can learn.