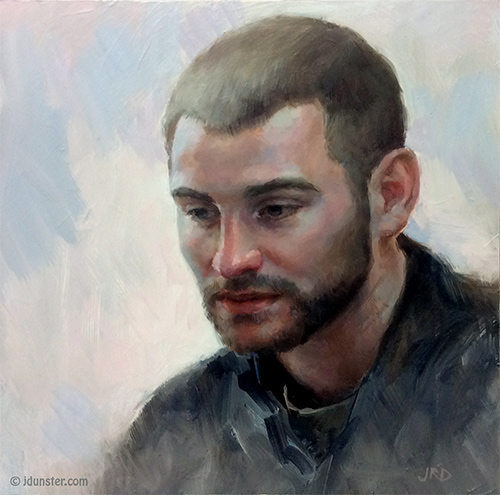 I’ve been picking at this painting, nursing it along, and there comes a point where it has to be DONE. I think there might be a few dabs here and there I might add… but not now! Not today! Not tomorrow! I can’t take it anymore!

The back story on this painting is as follows. Our figure drawing group (where we draw people—either clothed or nude—from life) had a new model. (She was modeling fully clothed, just so it’s clear!) She came with her protective brother, Levi, who wasn’t quite sure what we crazy artists are up to and wanted to act as chaperone. Well, one thing led to another, and Levi ended up posing for a few portraits himself! I did a quick sketch of him (I’ll post it later) and also took photos, one which was used as the basis for this portrait.

I found Levi’s expression interesting and thought I could make something of it. Levi seemed like such a nice young man; he said he’d just joined the military and it sounds like he’s got a very worthwhile future ahead of him. I saw a sweetness to his face, a wistfulness and a thoughtfulness.

I still see many technical flaws in this painting, maybe I like it, maybe I don’t… I’m in this phase in my artistic life where sometimes I just can’t say what I think about my work. I’m going through a transition. I’ve been learning a whole lot, have improved, but yet there’s still so far to go! Oy! What can you do, but just keep on putting one foot in front of the other, and keep painting?

As ambivalent I am sometimes about this painting, I do like the mouth and chin area, so I post a close-up detail of that. 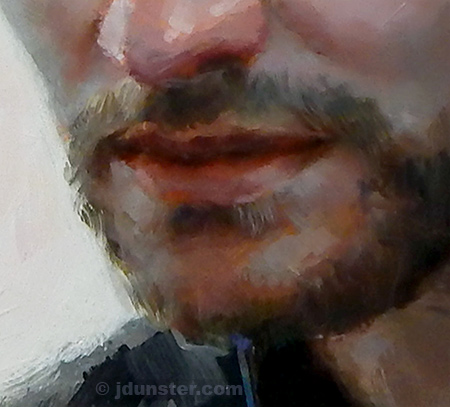 So, that’s what I have for now.

In other news, I do have some commissions in the works, some which are done (but which I haven’t yet posted) and some which are thisclose to being done, but not quite yet. Hopefully soon I can finish them and post them!