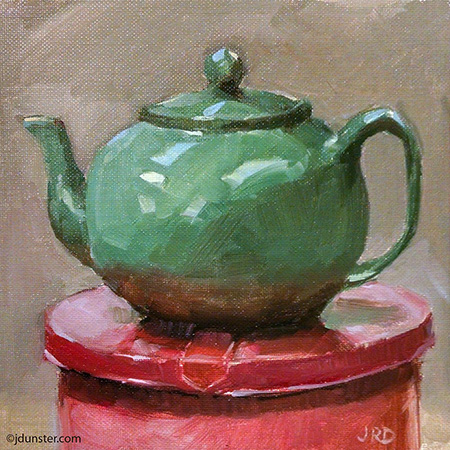 Still Life at the Studio

I don’t do many still lifes, so it was a big treat to be able to do this little painting. It was done as a class project with my student. We were supposed to paint an apple, but I forgot the apple. (I’m so prepared.) My student immediately suggested the lovely green teapot at the studio, which was a perfect choice! We perched it on top of the “Oily Rags” trashcan (which is something every oil painting studio should have for safety reasons) and away we went! This painting is just a “little study” but I’m finding that I rather like it. I intend to do more “little studies” soon!

Now on to my other news: More awards! Such a shock!

Confessions of an Art Leper.

I thought I’d write a bit more about my internal angst about getting into juried shows and getting awards, because I don’t think I’m the only artist who experiences this.

At a local show this weekend, I discovered that not only did I get the Best of Show (?!?!??!) I also got 1st Place in Oils! What?!??! I laughed so hard when I first heard the news. I’m sure the art show people thought I was nuts. (They wouldn’t be wrong.) I kept on saying, “This doesn’t happen to me!” I was thrilled, but also amused. That’s because it’s not normal. Not the way it’s “supposed” to work. I’m an art leper! I’m always overlooked! Losing is what I expect! What’s going on?!?!?

I suppose I should backtrack and talk about my long history of losing at art contests. Sometimes it felt like I was being deliberately overlooked. (It probably wasn’t true.) My best guess for the long losing streak was probably a combination of simply not being “good enough” (though at the time I thought I was), or entering shows that were not looking for my style of work. (Also, when I was a teenager I would enter fan art into local art shows. Kiss of death right there!)

But, I also recall some art show decisions that made no sense to me, and other artists around me had the same lament. I still remember an art show with only one judge, who strongly preferred abstracts (though the show was supposedly open to all styles of work). All realistic work was excluded. It caused such a stir that the show changed their jurying process after that. So . . . sometimes art shows can be flawed in their judging process, to be sure.

After a while, I stopped entering shows, because they seemed like an exercise in futility. I wasn’t exactly bitter about it, I just figured that they were for other people, not for me. I was still selling my work, so it wasn’t like I was not getting any encouragement. I just went on with my life.

But lately I’ve been reading art business articles which advise artists to enter shows and vie for awards. It’ll raise your profile, they say. I’ll give you publicity, they insist. Your work will gain value, they urge. So…sigh. Okay. All right! I’ll do it! I’ll give it a try!

I’ll be honest, this time around my experiences are still mixed. Of course I don’t win every time I enter! I am still rejected plenty of times. But then again, that’s always been normal for me. That’s what I expect. But what’s changed now is that occasionally I get something, much to my shock. It seems that when I don’t expect anything, is when I get something. Whenever I think, “You know, I think I may have a shot,” that’s when I get the big goose egg. So I guess the moral of the story is, keep trying, keep entering the shows, but don’t expect anything.

I wanted to share all of this because I know there are many other artists out there who are frequently disappointed, and wonder if it’s just them. I’m surely not the only “art leper” out there, am I? Always overlooked? (Until recently, anyway?)

All I can say is, keep on trying. Don’t take it too seriously! (I wrote more about that in a recent post about another shocking and completely unexpected award.) Getting—or not getting—awards should not be the defining thing in your art career anyway. Winning an award doesn’t suddenly make you “better” than you were before. Losing an award doesn’t transform you into something “worse” than you were before. It’s lovely to get the recognition and encouragement, but if you miss it this time, plan for next time.

I kind of liken entering art contests to playing the lottery. You know there’s no guarantee you’ll win, but you take a chance. Except, unlike the lottery, you do have some control over your chances. If you lose this time, you can work at improving your artwork and try again, and improve your odds of winning.

Another thing to learn from contests is that, the process is such that there is good work that will be excluded. It’s inevitable. So with that in mind, you shouldn’t take your own rejection too much to heart. (Or assume that acceptance means that much, since it can be pretty much a crap shoot of who wins and who doesn’t.)

If you look at the “entries” page at the Bold Brush Contest, you’ll see so many wonderful paintings. They all can’t win, can they? Even the “Fav 15%” nods must exclude a lot of great art. Actually, looking at the Bold Brush site is very enlightening, because it allows you to see behind the scenes, so to speak, and see what was entered, what won, what got a Fav 15% and what didn’t. You’ll not always agree with their choices, but at least you’ll have a better idea of where they’re coming from.